Legend says that the Chinese were the first to invent tea and also teapots. The first ones were made around the 8th century, and appeared during the Sung Dynasty (960-1270) and the Ming Dynasty (1368-1644).

These teapots were made of porcelain and were commissioned directly from Chinese artisans. They were very expensive as they were brought halfway around the world which in those days took around three years to get there and back. 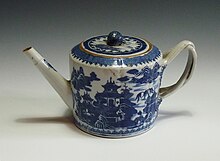 They were also quite a status symbol of the well to do, however, the desire of the middle classes to also enjoy a nice cuppa fuelled a huge new market for teapots not made in porcelain but other alternatives.

Now in the 21st century, we have some 300 years of European teapot tradition and innovation to draw upon. Our teapot, heritage runs from ‘Wedgewood’s Creamware’ to the many and varied influences of Victorian teapots.

Wikipedia states that the teapot was invented in China during the Yuan Dynasty and was probably derived from ceramic kettles and wine posts, which were made of bronze and other metals and were a feature of Chinese life for thousands of years. Tea preparation during previous dynasties did not use a teapot.

One thought on “WHO INVENTED THE FIRST TEA POT?…”